Grew up in Torrance, PA (the village, not the Hospital!) and graduated from Derry Area High in 1976.  Took a quilting class to hand piece and quilt a Pink applique baby quilt while waiting to enter the Air Force in Spring 1977.  From ’77 to ’81 she served our country in several roles ….. assigned to Charleston AFB, SC in the Individual Equipment Unit issuing flight suits and other military clothing to special units assigned to the base,  including a stint working at Hill AFB, Utah with a crew for munitions disposal in the high desert of Utah and ordering books for the library and audio visual supplies to be used in the training of  Air Force personnel in the Social Action Training School in San Antonio, Tx.  Karen attained the rank of Sergeant and was honorably discharged in 1981

From 1981 – 1985 Karen worked several jobs including the Waffle House and McDonald’s restaurants of Clemmons, NC; forklift operator and warehouse clerk for the sewage plant of Winston-Salem, NC; and ultimately earned the privilege of joining civil service as a Police Traffic Officer for the City of Winston-Salem Police Dept.

During Karen’s 13 years in the Police Dept. she served in the Special Operations Division specializing in traffic enforcement, firearms instructor (enjoyed competing with the Pistol Team), and Senior Police Property Specialist in the Evidence Division until her early retirement in 1997 at which time she moved to PA to marry lifelong friend Bill Frye.  Since then she has lived on and helped with the 200 acre beef farm.  She especially enjoys taking care of the 2 dogs, Cody and Walter, taking care of the farm’s mascot – Beau the Donkey and of course quilting.

In 2006 Karen got her first Statler – a 14’ Gammill machine – and what began as a hobby blossomed unexpectedly into a business. She now has 3 Statler longarm machines.

Some other things about Karen:

She took Horticulture in high school and while she doesn’t currently do much with growing things, she still enjoys testing her knowledge of flowers and the like (since Bill knows nothing about them!).

As a member of the “Loyal Hannahs Quilt Guild” in Saltsburg, PA, Karen actively participates in Guild activities that include service projects for local charitable causes. Karen also voluntarily quilts for “A Mother’s Tears” (National organization that gives quilts to the mothers of fallen police officers), Quilts of Valor for Armed Forces, Red Cross, Animal Shelter, and when a need arises.

While Karen respects all people’s beliefs and values she is a devout Christian – has taught Bible studies and Sunday School classes.  Evangelism is her focus and she supports ministries that have means to reach individuals around the world.  (Ditto for Bill)

Christmas Eve of 1958 began the life of one Bill Frye.  He lived in the tiny village of Boquet, PA until the family purchased a 200 acre Dairy farm in Blairsville, about 45 miles east of Pittburgh, PA in 1963.  He has lived on the farm ever since.  Graduated Derry Area High School in 1976, Indiana University of PA  (B.S.E.) 1980 he substitute taught for several schools until beginning a permanent science teaching position in 1990. He was an Earth/Space science teacher at Mt. Pleasant High school; also planetarium director (though never officially given the title, but that’s another story). Earning a Master’s at Gannon University in 1992 he continued teaching for 23 years until retiring in 2013.  He currently works the beef farm and occasionally helps Karen with the quilting/batting/Gammill stuff (as she helps with the farm also).

Some other highlights for Bill:

1994 – involved in a accident in a silo.  After 7 operations and 6 weeks in the hospital he ended up losing the right leg 5cm below the knee.  Currently does well with prosthesis – including climbing and maintaining the silos and all other farm chores.  (Check out this video - the silo unloader and setup is identical to the one that took Bill's right leg - thanks to whoever put this on Youtube)

How a silo unloader works

1997 married Karen!!!     Now here’s a story.  Karen and Bill were born 2 months apart and lived all of their school years 5 miles apart – attending the same schools, same church, confirmation class and other things.  But not once did Karen ask Bill out (Bill never asked anybody out – he was very shy in his early years) until November of 1996 when she asked Bill if she could go along with him to their 20th high school reunion.  At this point in time Karen was still a cop in Winston-Salem PD but was coming up for the reunion so Bill said sure. He would later admit he’d liked Karen all his life but didn’t know how to go about making it known.  So here we are… 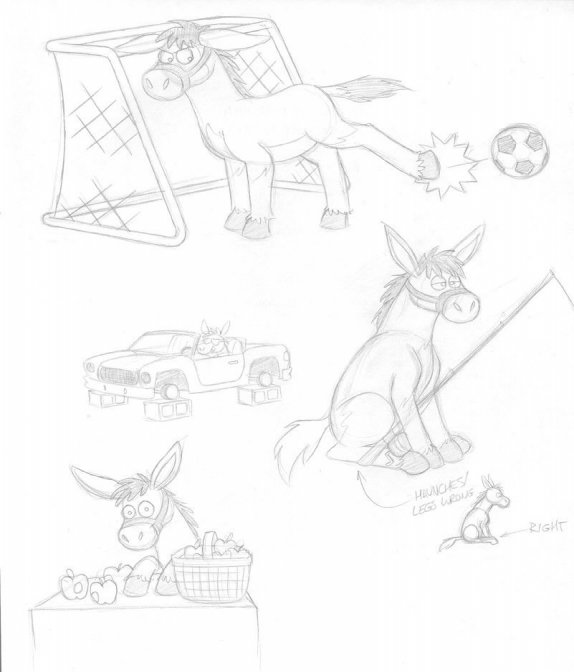 Click this link for:
A parrot only says two words - Humor from Dr. David Jeremiah

SPECIAL NOTICE: Beau the donkey went on to "Donkey Heaven" on December 20, 2017.  He had lived a good long life in donkey years - we think he was around 28.   We're not sure of his age because he was gotten from an individual that obtained him as a "rescue" animal.  Beau was in good spirits right up to the end - his death was sudden and unexpected but the vet said it "was his time."